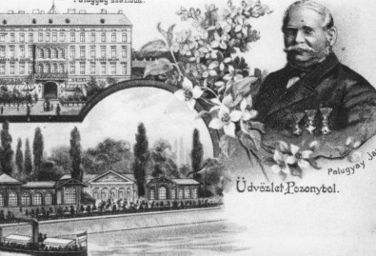 After a successful two-year operation in the valley of the river Vydrica on Železná Studnička, Jakub begins to look around for something bigger, in the very center of Bratislava. In 1844 he rented the Hotel u zeleného stromu on today's Hviezdoslav Square. It builds a summer terrace with a sun awning and gas lighting. The hotel starts offering its own wine. Jakub Palugyay buys a registered trademark of the company "Zum gruenen Baum" from the owner of the hotel Johann Loew. He started producing and selling his wine under this brand. According to data from the archival materials of the Municipal Museum, Jakub Palugyay began trading in his wine in 1844. Four years later, he became the rightful owner of the Hotel by the Green Tree, which he renamed the Hotel Palugyay. Renovated hotel with one hundred rooms, with restaurant, cafe and fully electrifiedkovThanks to his cuisine and his own wine, he made a good name for both the high nobility and church dignitaries.

For his kindness and generosity, Jakub earned the nickname Papa among the people of Bratislava. From the tenant of a small inn on the outskirts of the city, he developed into a large businessman and one of the wealthiest citizens of the city. Jakub's progress in the wine trade is evidenced by a mention in the prominent biweekly Wiener Salonblatt. She talks about his gift of 20 buckets of wine (about 1 liters) to the Vienna Regiment. It was the late 400'skov 19th century.

In 1864, Jakub Palugyaya's company began exporting its brandskovwines abroad. Also to countries such as Mexico or the United States. It was then that Jakub Palugyay's wines began to win awards at international exhibitions in Trieste, Brussels, Sydney, Vienna, Paris and Melbourne. Tokaj varieties and rieslings were especially awarded. In addition to the title of court supplier of the Mexican emperor and duke of Nassau, the titles of court supplier of the Belgian king and Archduke Joseph were added. In 1871, Palugyay became the court imperial and royal Austro-Hungarian wine supplier. The Palugyay wine brand is becoming known not only throughout Austria-Hungary, but also around the world.